’On a Celtic cross, a young soldier in a photograph' 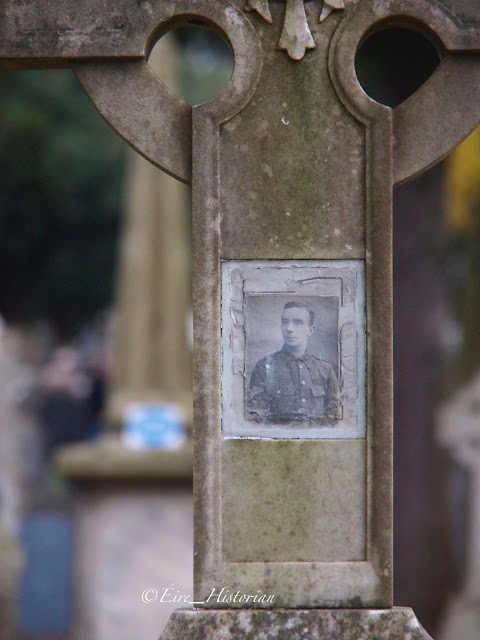 As the first world war began how many Irish families proudly affixed to the parlour wall a portrait of their fine young man in his uniform? How many of those portraits were trimmed in black crepe by the war's end in 1918, as a picture that was once a point of pride became an icon of mourning?
On this blog I have shared the stories of the young men in our family — William Dunne, Thomas Michael Kettle and William Pell — who were killed during the First World War. These stories secure our connection to them, and images of them serve to prompt remembrance.
This blog post is about another young man in an image, a young man to whom I am not related, who also gave his life on a battlefield in Europe so very long ago.
Sometimes when I am in a cemetery I find myself drawn to the grave of someone to whom I have no connection. Perhaps there is something about a carved detail on the stone, or maybe a line in the inscription, that makes me want to know more about those in whose memory the marker was erected.
On an unseasonably warm day, I was at Glasnevin to lay flowers on family graves. Nearby the grave of one of my maternal great-grandmother's sisters, out of the corner of my eye I saw a photograph affixed to a simple Celtic cross, and I felt drawn to look at it.
It turned out to be a very old image of a young man in uniform. I felt compelled to learn more about the tender looking soldier gazing out of that image. The inscription on the stone provided many details which helped to guide me in finding out more about him and his family.
The stone reads,

The image that drew me to this grave is of the Lyons' son Francis. As the inscription on the stone attests, Francis was a soldier in the Royal Dublin Fusiliers. The addition of his service number 6626 made it easier for me to find his First World War record of service.
Who was Francis Lyons...
Francis Lyons was a Sergeant in 'Y' Company, First Battalion, Royal Dublin Fusiliers. Francis was killed in action in France on 21 March 1918, at the very beginning of a period of battle which took place between March and August of 1918.
During this time of less than five months, the Allied Fourth and Fifth Armies were driven back across the Somme battlefields; thousands of soldiers perished, and Francis Lyons was among their number. Unfortunately in the case of Francis, his body was never recovered, so he has no known grave. However, he is memorialized on the Pozières Memorial near Amiens, France.
Further research on Francis Lyons's family led me to think that perhaps there are no longer any family members left to remember Francis, so when we are in France we visit the memorial on which he is commemorated.
On to Pozières...
The very first time we went to Pozières we left Paris early in the morning and drove north and west to Amiens, and the Pozières Memorial. Along the way we passed several smaller military cemeteries. The countryside was wide open and green, while the clouds rolling in had that slight timbre of rumbling within them that signals a storm. After driving for just over two hours, we reached Pozières. The imposing gateway is right next to the highway, and the cemetery dominates the surrounding landscape.
The inscription at the top of the gate describes those for whom the memorial stands:
In memory of the officers and men of the fifth and
fourth armies who fought on the Somme battlefields
21st March - 7th August 1918 and of those of their dead
who have no known graves

The Pozières Memorial commemorates the loss of 14,656 souls. The panels on the surrounding walls are filled with the names of those killed who have no known grave; the inscriptions are in order by regiment. As you can see from the dates recorded on the gate, Francis Lyons was among those who were killed on the very first day of this period of battle.

On the first day we visited, the rain held off, and after reading many of the other panels and following the numbers for a while, we went to panels 79 and 80, and there found the inscription in remembrance of Francis Lyons — LYONS,F.— along with those of his fellow regiment members. 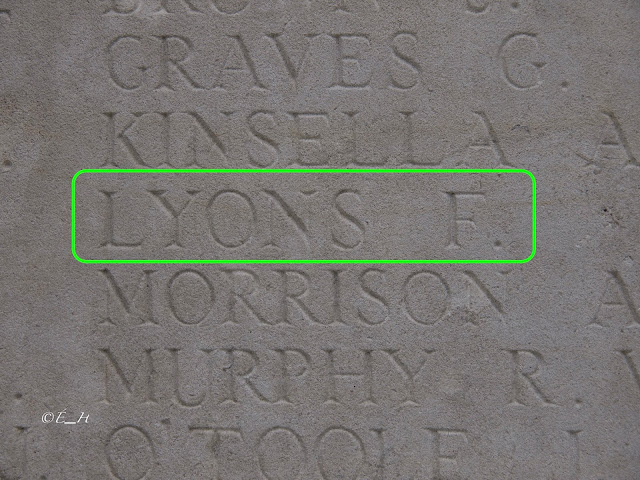 Though it is only a small gesture, each time we visit Pozières I trace the letters of the inscription for Francis, say a prayer to his memory and hope there are others who remember him.
As with many of the war memorials in France, there are so many names inscribed upon the walls, it can be overwhelming. When I visit them, I think about all of those families who over the last one hundred years have come to France to search for the graves of their loved ones, or for the simple inscriptions upon walls for those who have no known grave. At sites such as Poziéres, Thiepval, the Menin Gate, Tyne Cot, Hyde Park Corner (Royal Berks) and many others, these are the last remaining marks of the lives of their lost loved ones.

©Éire_Historian
Posted by Éire Historian at 5:08 AM No comments:

This is Anne Jellicoe (1823 - 1880), a woman about whom you've likely never heard. In Dublin City, Anne founded a college for the education of girls. Alexandra College played an integral role in the lives of many extraordinary Irish women, who in their turn had a profound impact on the history of Ireland.

Born Anne William Mullin on 26 March 1823, her whole life long Anne had a keen interest in uplifting the lives of Irish women. Following her 1846 marriage to John Jellicoe, the two moved to County Offaly where Anne opened a school for girls, teaching them lacemaking, homemaking and other practical skills.

Controversially, Anne not only took the bold move of teaching the girls to think independently, she decided to add taught subjects normally reserved for boys. The local Catholic priest was so outraged, he pushed the authorities to bring the school to an end.

Not to be deterred, Anne and John moved to Dublin, where Anne worked for charity schools. She taught poor and indigent women secretarial skills and bookkeeping, such that these women might secure employment by which they could support their families.

In 1861 Anne founded the Queen’s Institute for the Training and Employment of Educated Women. There Anne and other teachers provided technical training classes for women. It was located in the building that is now Buswell’s Hotel. (At the corner of Kildare & Molesworth streets, just over the road from the National Library of Ireland.)

Anne realised she wanted to do more than provide technical training for women. She recognised that women needed a well-rounded education. Having enjoyed a proper education herself, Anne mourned the dearth of such schooling for middle-class Protestant young women, and wanted to offer something comparable to that given to young men.

These ideas ran entirely contrary to the long prevailing belief that middle-class women should be educated only in ‘the accomplishments’ that which would allow them to attract a husband and raise a family. For a Protestant middle-class girl, needlework, music and appropriate reading, together with basic arithmetic (to work out the grocer’s bill) and a language from the continent, most often French, but occasionally Italian or German, comprised her education.

Little thought was given to those middle-class girls who would never marry or who would end up in very reduced circumstances, having been widowed or abandoned. Anne’s husband John died in 1862, and her own widowhood seemed to increase Anne’s desire to better educate women.

In 1866, with the help of Church of Ireland Archbishop Richard Chenevix Trench, who supported her mandate, Anne founded Alexandra College in Earlsfort Terrace, Dublin. The original plan was to educate governesses at the school, but Anne recognised the need to make the school into a university-style institution offering a firm grounding in taught subjects, including History, Physics, Chemistry, Euclidian Geometry, Algebra, English Literature, Languages and Art. These subjects would prepare young women to sit the same examinations as young men.

This was no easy task for Anne and others who held that educating young women was in and of itself intrinsically valuable. Catholic bishops in particular felt a world with educated women was an inherently bad thing, because to educate a woman was to bring her into an unnatural state away from her so-called natural roles of wife and mother.

Anne Jellicoe was among those who fiercely lobbied for the extension to girls of the Intermediate Education (Ireland) Act of 1878. The Act established the principle that girls and women had the right to sit for public competitive examinations and the right to earn university degrees.

By the time of Anne’s death on 18 October 1880, Alexandra College had become a recognised feeder school for young women entering university. Perhaps not surprisingly, her obituary named Anne as the ‘Lady Superintendent of Alexandra School’, but did not acknowledge the fact that she founded the college.

Today Alexandra College still exists. It now operates as an independent school, under the Church of Ireland ethos, and is recognised as one of the finest girls’ schools in Ireland.

Thankfully, in the 19th century, Catholic nuns (members of my own family among them) also got on board with the idea of educating girls for university entrance, but that is a story for another day.

1] A portrait of Anne William Mullin Jellicoe by an unattributed artist.

2] From my postcard collection, the back garden and Jellicoe Hall at Alexandra College.

“The Board shall from time to time, with the approval of the Lord Lieutenant, make rules for the purposes of this Act with respect to the following matters. For applying, as far as conveniently may be, the benefits of this Act to the education of girls.”

Posted by Éire Historian at 10:18 PM No comments: