This blog post originally appeared in March of 2014, with the intent to correct some of the misinformation about Irish records then floating around the internet, with respect to the explosion and fire at the Four Courts, the difference between the PRO and the GRO, and the 1926 census. Unfortunately some false claims continue to be made, so on this Tuesday’s Tips, once again it is time to revisit falsehoods, fibs and other fabrications. In each case I have stated the false or misleading claim that has been made, and followed it with information which explains the truth of the matter. In addition, I have included a number of informative online sources which may assist you in your search for your own Irish ancestors.

'All the records in The Four Courts were destroyed during the 1922 Rebellion'.

First off, there was no 1922 Rebellion. Second, not ‘all’ of the records were destroyed.

A timeline of conflict:

Be sure to visit the National Library of Ireland's excellent online exhibition:
The 1916 Rising: Personalities & Perspectives.

1919-1921: The Irish War of Independence took place from 1919 until the truce of July 1921. The Anglo-Irish Treaty was signed by Britain and Ireland in December of 1921, and ratified in January of 1922, resulting in the formation of the Irish Free State. However, not all involved parties in Ireland were happy with the result. The divide was so deep that it led to the Irish Civil War.

On 30 June 1922, in the Battle of Dublin during the Irish Civil War, a huge explosion and fire caused significant damage to the Four Courts complex and destroyed the Public Records Office (PRO) in rear of the west wing. Hardline anti-treaty forces (called Irregulars by Free State soldiers), under the command of Rory O'Connor had occupied the Four Courts Complex from 14 April 1922.

With the intent of getting the anti-treaty soldiers to abandon the complex, on 28 and 29 June, the army of Free State soldiers of the Provisional Government [later the Irish National Army] bombarded the building. Given that anti-treaty forces had been stockpiling munitions in the cellars of the PRO since their occupation, some historians posit that the bombardment by the Free State Army led to fire reaching those munitions, resulting in the massive explosion. Still others claim the anti-treaty forces planted mines that were exploded upon their evacuation of the complex.

See this post —> Going to the bookshelf to find family history for a couple of suggestions of books you might want to read in order to make a start toward learning more about this period in Irish history.

'There are no extant Church of Ireland parish registers, because they were ALL destroyed by the fire in The Four Courts'.

The blast and ensuing fire in the Four Courts resulted in significant losses, that is true, with official estimates saying well over 500 Church of Ireland parish registers were destroyed, as well as some other records of genealogical import; however, it is estimated that over 600 parish registers survived the destruction.

Ironically, concern over the safe storage of such records led to an 1875 amendment to the Public Record Office Act of 1867 (PRO 1867). The change in law required that all Church of Ireland (COI) parish registers, as well as other parochial records, be sent to Dublin for safe keeping in the new Public Records Office in the Four Courts. You can read the amended act —> here.

Changes to the PRO Act in 1876 gave the COI parishes the option of having their registers returned to them, so those registers could be kept in local custody, so long as they could prove they would provide safe storage, and a number of parishes exercised this option. If you want answers about exactly which Church of Ireland parish registers are extant, then you need to visit The Representative Church Body of Ireland website.

Members of the church are currently engaged in The Anglican Record Project, an ongoing programme to transcribe and digitize extant parish registers. A number of registers are already available online, not only for viewing but for downloading too. These registers hold records of Baptism (with many including birth date), Marriage and Burial, with some dating to as early as 1666.

Here is a fine example of the kind of information you will find in the transcriptions of the parish registers, this one from Christ Church, Delgany, Diocese of Glendalough, County Wicklow. 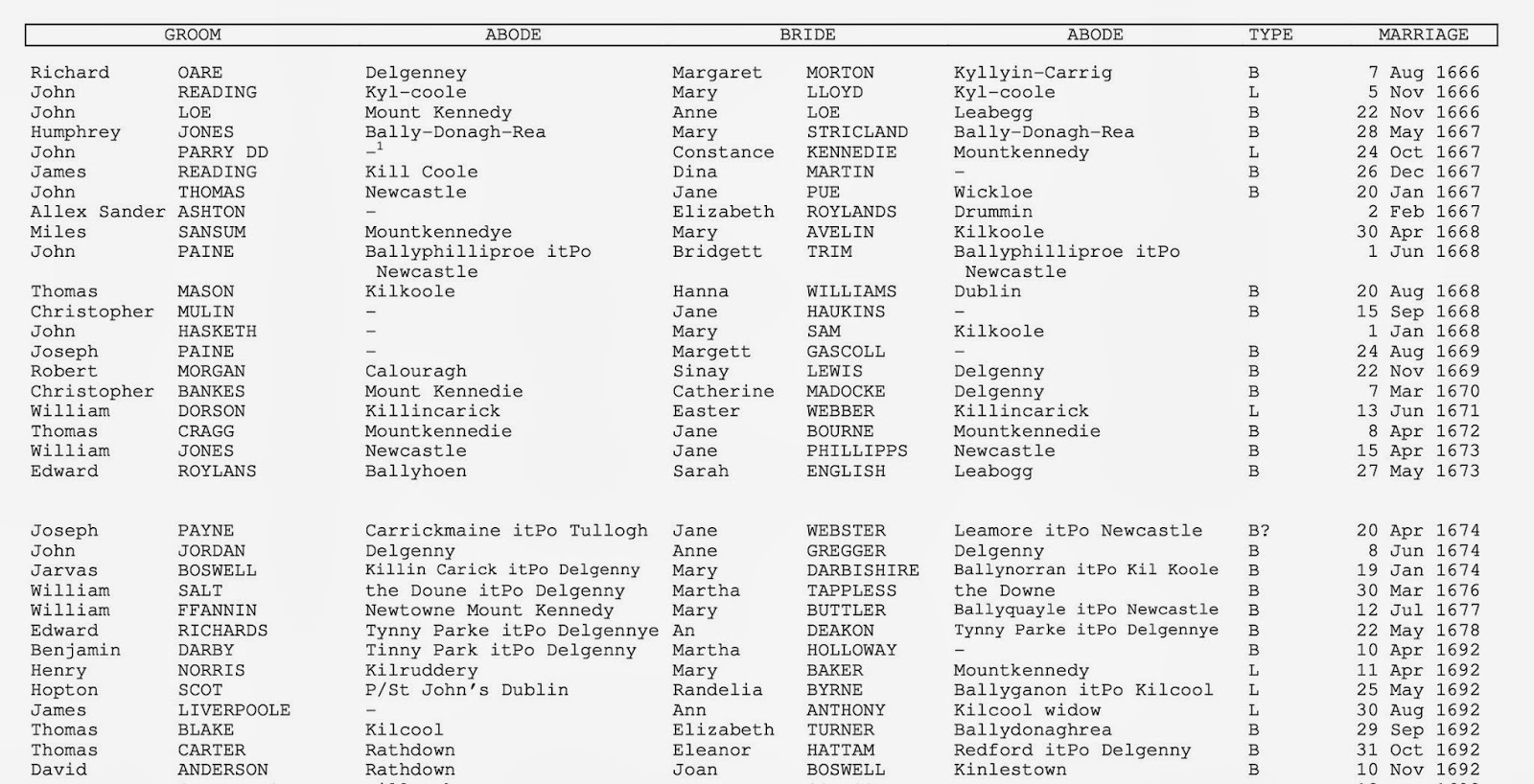 'There are no pre-1922 civil registration records of birth, marriage and death, because they were all completely destroyed in the fire at The Four Courts'.

Civil registration records of birth, marriage and death were NEVER stored in the Public Records Office at The Four Courts.

The very first repository for the records of the General Register Office (GRO) was the Kings Inns (1848-1872). From there the GRO moved to Charlemont house [the Hugh Lane Gallery since 1933] in Dublin (1872-1929). Relocation to the basement of the Custom House on the river Liffey took place in 1929; the GRO remained there until 1983. For accommodation reasons, as well as health and safety, in 1983 the office once again moved, this time across the river Liffey to Joyce House. In the same period the Superintendent Registrar's Office for Dublin was also accommodated on the ground floor of this new building.

In 1992 then Taoiseach (Prime Minister) Albert Reynolds made a commitment that would see the General Register Office relocated to Roscommon in the West of Ireland. As this move involved a major modernisation programme for the entire civil registration system, the relocation did not take place until April 2005.

The research room of the General Register Office, with its leather bound tomes, remains in Dublin; however, in autumn of 2013, it was moved to from the Irish Life Centre to Werburg Street.

'The 1926 census is going to be released any day now. They’re working on it.'

Current Official Status: The 1926 Census Returns will be released to public inspection in January 2027.

Although the 1926 census returns are stored in the National Archives of Ireland, the records are under the control of the Central Statistics Office (CSO). Not even the staff of the National Archives are permitted to view the returns. The CSO has indicated the census will not be released until January 2027
(see this page http://www.census.nationalarchives.ie/help/history.html).

Pádraig Dalton is the Director General of the Central Statistics Office. On 28 January 2014, he was in a committee meeting in the Dáil Éireann, the Assembly of Ireland, to discuss “a plan to capture the full value of our genealogical heritage”. In order to understand exactly what is going on,
you can view the transcript of that meeting here on The Houses of the Oireachtas website.
You can also read about it in the February 2014 issue of Ireland’s Genealogical Gazette.

Never let it be said that officials cannot be persuaded to change their minds. Even the most intransigent politicos and chief civil servants might sometimes be swayed, but we have to do our part.

Continuing the push for the release of the 1926 census is very important.

Visit the website of the Council of Irish Genealogical Organisations (CIGO) for more information and the link to sign the change.org petition asking for the opening of the census.

If you are interested in statistics — numbers and percentages, no names — for 1926, as well as other census years, then visit the website of the Central Statistics Office. There are a number of interesting statistics pages on this site that will whet your appetite for the 1926 census. For example, on the pages about jobs in 1926 in the Irish Free State, 9 women are counted among the 2, 599 persons who worked in Mining and Quarrying occupations. Also, 114 women are counted among the 47, 671 persons working in 1926 as builders, bricklayers, stone workers and contractors. Out of 5, 333 persons claiming the occupation of painter and decorator, 5, 298 of them are men and only 35 are women. Lots of interesting information for your consideration.

As always, the Best of Luck to you with your research!

Comments on this blog are always deeply appreciated; however, in the spirit of true collegiality, I ask that you do not write something you would not say to me in person. Because of spammers, CAPTCHA and comments moderation are in operation.

Any comments that are mean-spirited, include URLs which are not connected to the post topic, contain misinformation, or in any way resemble advertising, will be removed.